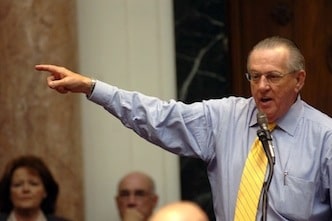 Last year Governor Steve Beshear established a task force to address a persistent problem of insolvency in Kentucky’s unemployment insurance system that was exacerbated by the worst labor market in thirty years. I was honored to have been asked to serve on that task force, along with seventeen other Kentuckians representing widely divergent interests in the business and labor communities. Our task force included several other members of the House of Representatives and Senate, both Democrats and Republicans.

After eleven full task force meetings and five sub-group meetings, employer and employee interests came together to deliver a set of recommendations to the Governor and to the General Assembly about how to return the unemployment insurance system to solvency. Those recommendations became House Bill 349, legislation that I sponsored and that passed the Kentucky House of Representatives on February 8th by a vote of 97-0.

To view a PDF file of the Herald-Leader article, click here.