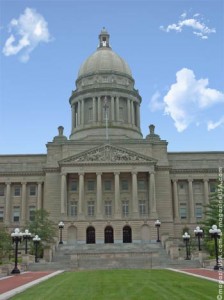 The 2011 regular session of the Kentucky General Assembly recently came to a close. Several important bills passed the session, including major reforms to the corrections system for drug offenders (HB 463), legislation addressing selection of school principals (SB 12), one-stop business services (SB 8) and prevention of elder abuse (HB 52), just to name a few. Just as important, we also passed HB 26, which allows the creation of a wastewater commission in the Fort Knox/Salt River basin area as a pilot project to demonstrate how wastewater handling and infrastructure costs can be shared among multiple users. This will better protect our water quality and build out infrastructure more efficiently to sustain economic development.

I am pleased to note also that two bills I sponsored passed both the House and Senate this year. House Bill 387 will give the Kentucky Racing Commission the ability to require that advance deposit wagering companies report the amount of the wagers they accept in Kentucky. Advanced wagering is the main growth area in horse race wagering, and we need to get a better accounting of the effect it is having on the marketplace. This bill will help us to gather that information. House Joint Resolution 5 requires the Legislative Research Commission to contract with a consultant to study the tax and economic development incentives programs offered by Kentucky.  This study will help us to understand what our incentives programs are achieving now and how we might be able to design them better to achieve the best value for our investment.

Unfortunately, the General Assembly was unable to agree on how to resolve a deficit in the Medicaid budget, necessitating a special session. Clearly, this issue should have been resolved. From my point of view, the reason for this is obvious. I think it is important that I communicate with you to explain the impasse that has caused this result.

Governor Steve Beshear has worked very hard at managing the two budgets the General Assembly has passed since he became Governor in 2007. Over this time, he has executed eight budget reduction orders, to the tune of $1.3 billion in reduced expenditures to account for revenue losses caused by the recession.

In November, the Governor laid out a plan to resolve a $140 million deficit in the Medicaid budget by moving funds from the second year of the budget up to the current year, including an additional $26.5 million to take advantage of enhanced rates for federal matching funds that will expire at the end of June. Accessing the higher match rates by itself will save $12 million in state funds. Click here to read my fact sheet on Medicaid rebalancing.

The Governor proposed to balance the second year of the Medicaid budget by instituting managed care principles into the Medicaid plan, which he projects will achieve savings in the total Medicaid budget equal at least to the current year deficit. House Leadership, Democrat and Republican, agreed with this plan, and the House passed the plan in House Bill 305 with significant, bi-partisan support. This is where the problem begins.

The Kentucky Senate, with only four days remaining before the veto recess, changed the House plan by moving the funds up to the current year but balancing the second year by cutting the entire budget across-the-board (with a handful of exceptions) to the tune of more than 2%. By way of example, this would have cost the Jefferson County Public Schools around $4 million and the University of Louisville $4 million in fiscal year 2012. This is on top of a 4.5% cut in the current budget passed in 2010. Strangely enough, if we had agreed with the Senate’s plan, we would have cut education more than we cut Medicaid, when there is not even a problem in the education budget.

I and the rest of my House colleagues see no need to do this. The problem exists within the Medicaid budget. No other component of the total budget – not corrections, not education, not public safety, not state police, not social workers – is out of balance. And the problem does not lie in a revenue shortfall. In fact, our revenues are improving as the economy improves. No, the problem is in Medicaid, and we can fix the problem within the Medicaid budget by allowing the Governor the ability manage it, just has he has proven he can do.

When House Bill 305 went to conference committee with the Senate, the House made three different proposals to compromise with the Senate in an attempt to reach a middle ground. Unfortunately, Senate President David Williams, who is running for governor, seems more interested in making unnecessary budget cuts to further his political aspirations instead of solving a relatively simple problem. That is the source of the problem we have today and the reason for the upcoming special session.

That being said, I am encouraged that wisdom and common sense will prevail, and the House and Senate can reach an accord on this issue in a short period. I have tried, and will continue trying, to represent your interests and those of your friends and neighbors in the 46th District. It is an honor serving you, and I am pleased to maintain my 100% voting record in the House, showing up for work every day to address the issues important to you. If you have questions or comments about these subjects or any others, feel free to contact me. You can follow developments in the General Assembly by accessing the Legislative Research Commission website at www.lrc.ky.gov.