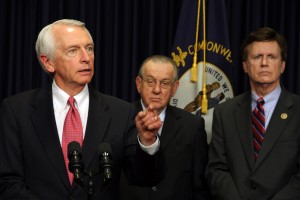 March 30, 2011- Last week, the House and Senate passed legislation in a special session to resolve a disagreement over a deficit in the Medicaid budget for fiscal year 2011, the first year of the current two-year budget. The General Assembly was called into special session by Governor Steve Beshear because this problem had not been resolved by the end of the 2011 regular legislative session.

The problem centered around one basic question: Should the Governor be authorized to fix the Medicaid budget deficit within the Medicaid program, as we have allowed past Governors to do, or should we enact across-the-board budget cuts to all programs, including health and human services, education, veterans, and senior citizens, to fix the problem?

This impasse was much like our disagreement at the end of the regular session. During negotiations at that time, the House offered three different compromises to the Senate to help reach a consensus. All were rejected. House Bill 1 represented another compromise by the House, because we agreed to employ a trigger mechanism to require budget reductions if the Governor could not balance through appropriate fiscal management. The Senate also rejected this offer, opting instead for direct, across-the-board budget cuts.

To resolve the stalemate and avoid a drawn-out special session, the House agreed to concur with the Senate amendments to House Bill 1, with assurances from the Governor that he would stop these unnecessary cuts through use of his veto power. The Governor exercised his veto on Friday, March 25th.

The end result is this: The Medicaid budget for fiscal year 2011 will balance; plus, we will achieve an additional $12 million in savings by drawing down more federal dollars for Medicaid based on a higher federal funds matching rate that is available to us only until June 30th. The Governor will balance the Medicaid budget in fiscal year 2012 by instituting managed care savings in the Medicaid program, a policy which has achieved substantial program savings in states that have tried it. The budget cuts to our public schools, colleges, technical schools, veterans’ services, social workers, state police and prosecutors proposed by the Senate are now eliminated, avoiding the harm that would have resulted from those reductions. Finally, significant Medicaid provider rate reductions will be avoided, which will preserve access to health care, as well as the economic viability of our doctors and hospitals that treat Medicaid patients all across the Commonwealth.

The state Senate had presented the House with a choice between cutting Medicaid and cutting the entire budget to save Medicaid. This was a false choice. We did not have to take that action to solve the problem.

Governor Beshear has, to this point, successfully managed Kentucky’s finances, mainly through a series of budget reduction orders that have cumulatively reduced budgeted expenditures by $1.3 billion since he took office. He should be afforded the flexibility to continue his sound management. Past Governors have been allowed to manage larger deficits in Medicaid, and this Governor should not be an exception to past practice.

This solution effectively ended the special session earlier than it would have ended otherwise. It preserves the viability of Medicaid, avoids unnecessary budget cuts to other important programs, and it represents a practical solution based on common sense and not political ideology.

You and your friends and neighbors in the 46th District have sent me to Frankfort to solve problems, not to score partisan political points. There is a time and a place for that, but not here and not now, not when the decisions we make as legislators have very real consequences for the people we serve. Our schools, colleges and universities, veterans and seniors could not stand the pain additional cuts would inflict, particularly when the proposed reductions were completely unnecessary. I think the outcome of this special session was the best we could achieve from a practical standpoint, and I hope the information I have shared with you in this letter sheds some light on the decisions we made.

Feel free to contact me if you have questions or comments on this subject or any other that concerns you. It is a privilege representing you in the General Assembly, and I am proud that I continue to maintain my 100% voting record in the House, working daily on the issues that are important to you. Thanks very much for your time and attention.