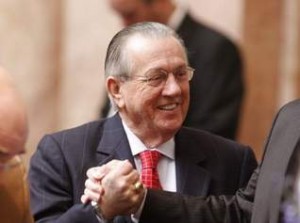 January 5, 2011 – Today, Representative Larry Clark was re-elected as Speaker Pro Tempore of the Kentucky House of Representatives on a vote by the entire House membership, Democrats and Republicans. Today’s election came on the heels of yesterday’s vote by the members of the Democratic House Caucus to re-elect Clark to the position he has held since 1993. Clark was sworn in as Speaker Pro Tem by Supreme Court Chief Justice John D. Minton in a ceremony at noon at the Capitol.

Larry Clark was challenged by former Speaker of the House and two-time candidate for governor, Jody Richards. “I am honored to have earned the continued support and trust of our members and look forward to working with all members of the House to strengthen our economy and focus on job creation for the Commonwealth,” said Clark.

Clark was re-elected in November to represent the 46th District and has served in that position since 1984. He continues to maintain a 100% voting record. Clark has sponsored legislation for job creation, economic development and education, and he has been a supporter of seniors and veterans. For more information, visit www.KeepLarryClark.com.