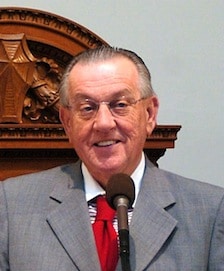 Frankfort, KY- In an effort to track and improve state economic development incentive programs, Rep. Larry Clark, (D-Louisville), has sponsored House Joint Resolution 5 (HJR 5), which will direct the Kentucky Legislative Research Commission to hire an independent consultant to review and report on incentive programs and practices administered by the various agencies of the Commonwealth, particularly the Cabinet for Economic Development and the Economic Development Partnership Board.

HJR 5, which has been approved by the House and Senate and awaits the governor’s signature, received unanimous bipartisan support.  Clark said the motivation behind the legislation was to determine what incentives worked and what the state should do to get the best return on its investments.

“Incentives are an excellent economic development tool when applied appropriately and carefully monitored,” said Rep. Clark, who serves as the Kentucky House of Representatives’ Speaker Pro Tem.  “However, I believe that transparency, accountability and results must be achieved in order to justify these kinds of programs, particularly in our still-recovering economy.”

Rep. Clark added that Kentucky’s policy makers over the years have lacked an effective means to evaluate which programs are most effective and represent the best value to the Commonwealth in exchange for the incentives granted.  “We need a starting point from which to gauge the performance of the companies that receive these incentives.  This study will start us down that road,” he said.

HJR 5 would require the consultant to submit a report at the end of this year, which would calculate the state incentives already granted, tax revenue waived, job creation and retention, wages paid and new taxes generated. The report would compare Kentucky’s job-creation efforts with other states and analyze what companies must repay if the project doesn’t succeed or employment targets are not met.

“This is the second year I’ve sponsored this legislation,” said Rep. Clark.  “It was a collaborative effort with the governor’s office and the Cabinet for Economic Development, whose representatives worked with me to establish the parameters of the study authorized in HJR 5.”

Senate amendments to HJR 5 require the Legislative Research Commission to engage the consultant. The study will also examine the process of selecting and hiring the cabinet secretary.

“The Senate amendments have made this resolution stronger, and I welcome and appreciate their support of HJR 5,” said Rep. Clark.

Clark is in his 28th year representing the 46th Legislative District and has served as the House Speaker Pro Tem since 1993.  Over his career, he has a 100% voting record in the Kentucky House.