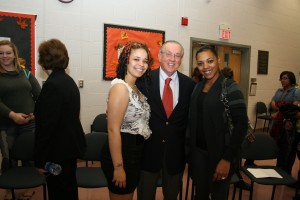 Thirty-four years ago, a woman named Georgia Chaffee started the TAPP Program (TeenAge Parent Program) in Louisville.  TAPP operates two schools for young women who become mothers while still in high school.  Ms. Chaffee saw how high the dropout rate was for these girls, and she did not believe they should suffer diminished educational opportunities simply because they were faced with these difficult circumstances. 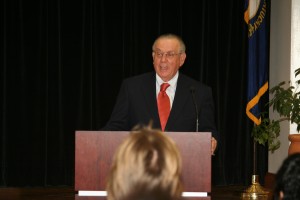 Rep. Clark invites the young women of the TAPP program to visit Frankfort during the legislative session

Clark’s interest in the TAPP students began several years ago.  Each year during the Christmas holidays, Clark’s Catholic Parish, St. Athanasius, delivers gifts to the TAPP students and their children.  In 2007, Rep. Clark helped deliver these gifts.  He visited the TAPP School and learned that a federal grant supporting the school was due to expire.  (That grant was called “SMART”, for “Science, Math and the Right Technology”.) The SMART Program was created to motivate students with special mentoring, site visits to potential employers, and college campus visits.   Results monitoring had demonstrated higher CATS scores, better attendance and overall higher levels of achievement among the TAPP students, whose efforts were funded in large part by the SMART grant. 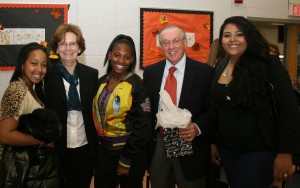 During the 2008 Legislative Session, at the urging of Rep. Clark, the TAPP students came to Frankfort, where three of them testified before the House Appropriations and Revenue Committee about the importance of TAPP and the SMART Program, and the impact of both programs on their lives.

Thanks to Larry Clark and some help from those TAPP students, $500,000 in state funding was secured to replace the SMART grant and continue support for the program.  Rep. Clark was later able to secure similar funding in the 2010 budget for TAPP.  These resources give these students an opportunity to succeed in their education.  Rep. Clark likes to say that this relatively modest investment positively impacts at least two generations because it improves the prospects of both the mothers and their children.