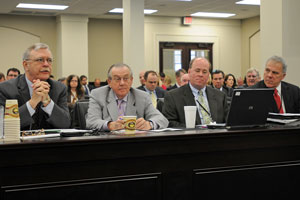 The Kentucky House of Representatives, on a vote of 97-0, passed House Bill 495, legislation authorizing a plan to pay interest payments on federal loans made to Kentucky to pay unemployment insurance claims over the past three years.

“Because of  the difficult economy we are just now emerging from, Kentucky’s demand for unemployment insurance has skyrocketed in the past several years,” says Rep. Larry Clark (D-Okolona).

“This jobs bill  is the best solution among several considered because it avoids a disastrous tax increase that would raise federal UI taxes from $63 per employee to $420 per employee,” says Clark.  “It cushions our employers from this tax blow and gives the economy two more years to continue recovering before we impose an additional employer surcharge.”

If the interest was not repaid, taxes would have increased by $600 million, placing a significant burden on employees and employers alike.

HB 495 authorizes the state to borrow funds to make the interest payments due.  Beginning in 2014, employers will see a surcharge of .22% of each covered employee’s first $9600 in wages.  Revenue from that surcharge will be used exclusively to repay funds borrowed to make interest payments on the federal loans.

“Employee groups and business interests alike recognized the gravity of the situation,” says Clark.  “They worked together, and creatively, to design a legislative solution that will not impose additional burdens on our employers at a time when our economic recovery remains fragile.”

HB 495 has the active support of the business community including The Kentucky Chamber of Commerce, Kentucky Retail Federation, Kentucky Homebuilders Association, the Associated General Contractors, the Kentucky Association of Manufacturers, the Kentucky Federation of Independent Businesses and the Kentucky State Building and Trades Council.  The bill now goes on to the Senate for its consideration.

Larry Clark has represented the 46th Legislative District in southern Jefferson County since 1984.  He has served the House as its Speaker Pro Tem since 1993.  Clark has maintained a 100% voting record throughout his 28 year career in the Kentucky House of Representatives.