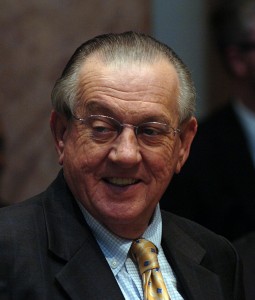 FRANKFORT, KY– Rep. Larry Clark was instrumental in securing the state’s portion of funding for indigent medical care provided through the Quality and Charity Care Trust Agreement (the “QCCT”).

In 2011, 61,000 people were treated at the U of L Hospital under the QCCT.  48,000 of these came from Jefferson County, with the rest from 109 other counties across Kentucky.  Many of these individuals are employed but lack health insurance.

Over the past several years, the City of Louisville has reduced its annual contribution from approximately $9.5 million per year to around $7 million. In its version of the state budget, the Kentucky Senate reduced the state appropriation by around 27%. This reduction represents the same percentage by which the City has reduced its support.  Accepting the Senate budget would have resulted in a cut to the QCCT of around $11 million.

Rep. Clark persuaded the budget conference committee to adopt a modified version of the House appropriation for the QCCT, restoring $20 million in the first fiscal year of the budget and $21 million in the second year, saving the program from a reduction that would have seriously diminished the hospital’s ability to adequately care for the state’s working poor.  Under the enacted budget bill, state support for the QCCT would be reduced only if Louisville Metro reduces its own appropriation.

“With the poor economy over the past several years, the population of individuals treated under the QCCT has grown,” said Clark. “The best outcome was to preserve the status quo.  Louisville needs to pay its share, but in the event the City doesn’t do that, any cut in the state appropriation will be on a dollar-for-dollar basis with the City’s reduction, which would result in a much lower percentage cut than recommended by the Senate.  This the best we could do under difficult circumstances.”