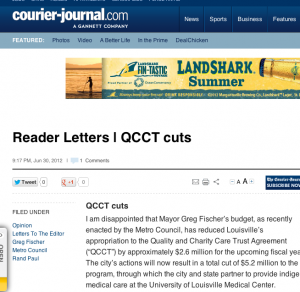 I am disappointed that Mayor Greg Fischer’s budget, as recently enacted by the Metro Council, has reduced Louisville’s appropriation to the Quality and Charity Care Trust Agreement (“QCCT”) by approximately $2.6 million for the upcoming fiscal year. The city’s actions will now result in a total cut of $5.2 million to the program, through which the city and state partner to provide indigent medical care at the University of Louisville Medical Center.

Funding the QCCT was a focal point of budget negotiations during this year’s General Assembly, as it has been now for several budget cycles. I have consistently supported the proposition that the state and city fully fund their respective obligations to the QCCT, but I have found that when the city fails to do its part, it becomes difficult to argue that the state should continue to fully fund the trust under its own obligations.

The commonwealth has consistently met its contractual funding duties under the trust agreement through successive gubernatorial administrations and General Assemblies. To avoid an up-front reduction in state funding to the program, the House and Senate this year agreed to language that would require a dollar-for-dollar decrease in the state appropriation only if the city did not fund the trust at its own contracted-for amount, around $9.6 million. We gave the city a chance to meet its obligation and affirm its commitment to being a “compassionate city.” Instead, the city has reduced its appropriation to $7 million, cutting its support for the program by 27 percent. The end result is a dollar-for-dollar state cut equal to the amount by which the city has reduced its appropriation, for a total of $5.2 million.

This reduction will have dire consequences for the substantial numbers of working poor people who receive care under the trust. One-third of the population served by the QCCT is employed, pays taxes and contributes to the community. They simply lack health insurance.

This 27 percent cut is much more significant than the budget reductions other city agencies have borne. If our community genuinely aspires to be a “compassionate city,” we have to do much better than severely cutting health care to the working poor. I would suggest that all city policymakers rethink the current position on the QCCT and commit to restoring funding as the city moves forward into the next budget year.

The Mayor’s budget does not have to be the last word on this subject. The city will have opportunities throughout the next year to match its feel-good slogans with actual practice, and I suggest it do so.