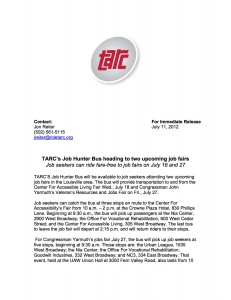 TARC’S Job Hunter Bus will be available to.job seekers attending two upcoming job fairs in the Louisville area. The bus will provide transportation to and from the Center For Accessible Living Fair Wed., July 18 and Congressman John Yarmuth’s Veteran’s Resources and Jobs Fair on Fri., July 27.

Job seekers can catch the bus at three stops en route to the Center For Accessibility’s Fair from 10 a.m. – 2 p.m. at the Crowne Plaza Hotel, 830 Phillips Lane. Beginning at 9:30 a.m., the bus will pick up passengers at the Nia Center, 2900 West Broadway; the Office For Vocational Rehabilitation, 600 West Cedar Street; and the Center For Accessible Living, 305 West Broadway. The last bus to leave the job fair will depart at 2:15 p.m. and will return riders to their stops.

For Congressman Yarmuth’s jobs fair July 27, the bus will pick up job seekers at five stops, beginning at 9:30 a.m. Those stops are: the Urban League, 1535 West Broadway; the Nia Center; the Office For Vocational Rehabilitation; Goodwill Industries, 332 West Broadway; and NC3, 334 East Broadway. That event, held at the UAW Union Hall at 3000 Fern Valley Road, also lasts from 10

a.m. to 2 p.m. The last bus to leave that job fair will depart at 2 p.m. and will return riders to their stops.

There is no charge to ride the Job Hunter Bus, which provides pre-planned transportation to groups of twenty or more potential employees to job fairs throughout the metro area. All TARC buses are can accommodate wheelchairs and are equipped with bike racks.