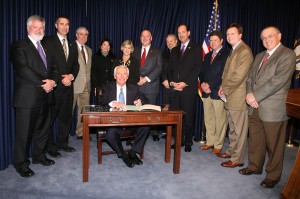 The 2013 session of the General Assembly ended in April with strong bipartisan support for major initiatives to create jobs, support education and public protection. Legislation was passed to make government more accountable to the people of the Commonwealth.  We agreed to a plan to support the pension system for public employees without raising any taxes.

House Bill 1 will provide the public better oversight and transparency regarding   the public of state’s 1,200-plus taxing districts that collect revenue from the taxpayers.

The House and Senate came together to pass bipartisan reform that includes easing the public pension debt and reforms for new hires to strengthen the state pension program.

Legislation was passed to allow microbreweries to sell malt beverages produced on the premises to individual retail consumers, promoting small business and tourism.

House Bill 7 was passed that will allow agency bonding for higher education projects for Kentucky’s universities to allow them to move forward with capital projects.

The General Assembly passed Senate Bill 50 to authorize the production of industrial hemp, providing the framework for job creation, as well as a potential new revenue source for Kentucky’s farmers.  The Federal Government still must lift the current ban on hemp cultivation before Kentucky can move forward.

Legislation was passed to make voting easier for Kentuckians serving overseas in the military.  The new law will allow members of the armed forces and their spouses serving abroad to register to vote by absentee ballot electronically.

The General Assembly reached a compromise on Senate Bill 97 to keep children in school to complete their education. The new law will allow school districts to raise the high school dropout age to 18 and could require the change statewide in a few years.

Governor Beshear signed House Bill 3 into law to will strengthen enforcement against the fast growing crime of human trafficking.

Although not enacted by the Senate, the House passed a redistricting plan in House Bill 2 that more fairly aligns legislative districts with the changing population demographics.

I was honored to sponsor a resolution recognizing the 100th anniversary of Ford Motor Company building cars and trucks in Louisville, which has been a significant part of the economic, social and cultural heritage of the City of Louisville.

Looking Ahead to Next Year

Next year the General Assembly will enact its next budget and I will continue to work for jobs, education, protection for seniors and our most vulnerable citizens, and to keep our state on solid financial footing.

If there is anything I can do to help the citizens of House District 46 relative to state government, I am always available to help. Visit my website for information or to contact me (http://keeplarryclark.com). Click the Contact Us link for phone numbers and e-mail.  Please always include your address and e-mail address so that I can add you to my newsletter mailing list.  The General Assembly will continue to work during the interim months. As always, I look forward to hearing from you.