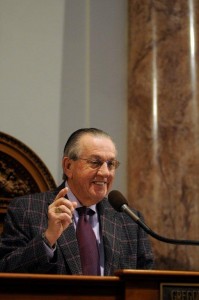 National Board and Governor Beshear Appoint Clark to Serve

Frankfort, KY—Representative Larry Clark (D-Louisville) has been appointed to the Governing Board of The Council on State Governments. The Council of State Governments, headquartered in Lexington, KY, is the nation’s only organization serving all three branches of state government. CSG is a region-based forum that fosters the exchange of insights and ideas to help state officials shape public policy. This offers unparalleled regional, national and international opportunities to network, develop leaders, collaborate and create problem-solving partnerships. The two-year term will commence immediately and Clark will serve until December 31, 2014.

Clark represents the 46th District in Louisville and has served in that position since 1984 and he maintains a 100% voting record.  He has served as House Speaker Pro Tem since 1993, having been re-elected to that position for the 11th time in January 2013. Clark has sponsored legislation for job creation, economic development and education, and he has been a supporter of seniors and veterans. For more information, visit www.KeepLarryClark.com.