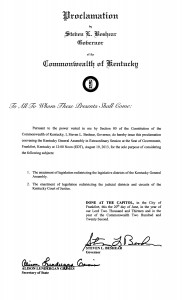 FRANKFORT, Ky.  (June 20, 2013) –  “I have today issued a proclamation calling the Kentucky General Assembly into special session on Aug. 19, 2013, to address legislative and judicial redistricting.

I am confident that both the House and Senate will have their plans drawn and any remaining issues resolved by Aug. 19 so the special session will last only five days and therefore minimize the expense to taxpayers.”  –  Governor Steve Beshear