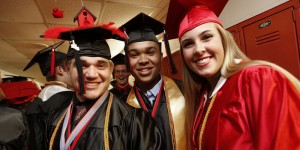 (Frankfort, KY) – Kentucky recorded better than expected gains in student achievement under the federal No Child Left Behind Act (NCLB) and is leading the way as a high-performing state among those receiving waivers from the Elementary and Secondary Education Act (ESEA). The findings are among those in a recently released national study, The New State Achievement Gap:  How Federal Waivers Could Make It Worse – Or Better by Education Sector Reports.

“We have been aggressive about making improvements in our schools and this study is proof that those efforts are paying off,” said Kentucky Education Commissioner Terry Holliday.  “While achievement gaps remain among student groups, we are making progress,” he said. “Kentucky is no longer among the bottom states when it comes to education.”

The study compares student gains on the National Assessment of Educational Progress (NAEP) from 2003-11 in grades 4 and 8, reading and math for all students. Kentucky students recorded an overall gain of 28.2 points, which translates into not quite three-fourths of a year of improved achievement per assessment from 2003-11. That is better than the national average gain of 20 points, about a half-year of achievement gains per test.  Nationally, Blacks, Hispanics and students eligible for free or reduced-price meals showed a significantly greater gains than white students narrowing the achievement gap somewhat – the intention of the No Child Left Behind Act.

When taking into account predicted gains based on starting points and economic disadvantage, Kentucky charted the fourth highest gains in the country behind Maryland, Massachusetts and New Jersey.

“Normally, non-school factors such as initial scores and family background and income have a significant impact on student achievement,” Holliday said.  “However, in this case, non- school factors account for little of the variation in gains. That means state policy and school improvement are at the root of our progress.”

Holliday said Kentucky built upon its successes under NCLB in its request for ESEA flexibility.

“Moving from a goal of proficiency to a more rigorous goal of college/career-readiness for all students raises the bar on student achievement,” Holliday said.  “In addition, we have developed measures and the capacity to intervene in schools that are not making progress. Our new Professional Growth and Effectiveness System will round out improvement efforts, by ensuring every child is taught by an effective teacher and every school is led by an effective principal.”

The report concludes that as Congress works to reauthorize ESEA, it should consider progress made in states like Kentucky to identify measures that reduce inequality, and continue to give states the freedom allowed by waivers as long as they are held accountable for what students achieve.

The full report may be accessed at http://www.educationsector.org/publications/new-state-achievement-gap-how-waivers-could-make-it-worse-or-better.