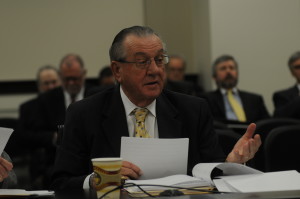 Frankfort, KY—Legislation to increase accountability and transparency for economic development incentive programs in Kentucky, House Bill 17, cleared the House Economic Development Committee this morning, moving the legislation forward to the full House for consideration.  Last year Clark filed similar legislation (HB 242) that passed 100-0 in the House of Representatives during the 2013 legislative session. Clark says the legislation was recommended in a study of Kentucky’s economic incentive program that was performed in 2012 following the passage of a joint resolution Clark sponsored in 2011.

“Kentucky has spent over a billion dollars in tax breaks for companies in the past twelve years,” says Clark.  “The information should be fully accessible to the taxpayers so they know what their return on investment is, where the money is going and how many jobs have been created.”

“An independent agency has recommended that Kentucky’s Economic Development and the Tourism Arts & Heritage Cabinets implement centralized reporting through their website to increase transparency and accountability for our economic incentive awards,” says Clark.  “The reports would be available for the citizens of the Commonwealth to know who is receiving tax incentives and what jobs are being created as a result of the programs.”

The bill will require the Economic Development Cabinet to maintain a database accessible to the public that will display information about incentives for projects approved over the previous five years.  That cabinet and the Tourism Arts & Heritage Cabinet will collaborate to produce an annual report on the incentive programs each administer, a report that would be submitted to the Legislative Research Commission and the Governor’s office each November 1st.  The agencies will provide the information without incurring additional costs to their respective departments.

Clark represents the 46th District in Louisville and has served in that position since 1984 and he maintains a 100% voting record.  He has served as House Speaker Pro Tem since 1993. Clark has sponsored legislation for job creation, economic development and education, and he has been a supporter of seniors and veterans. For more information, visit www.KeepLarryClark.com.