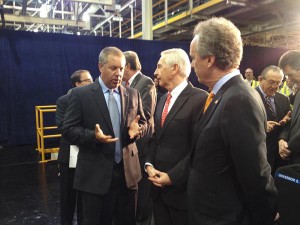 “This is a day of celebration for Ford and Kentucky,” said Gov. Beshear. “Ford has a long-standing tradition of creating quality vehicles and quality jobs in the Commonwealth. Kentucky is already the third largest auto producing state in the country, and Ford’s expansion will push us closer to the top. I’m looking forward to seeing even more Kentucky-made F-Series pickups on the roads and more Kentuckians back to work as a result of this investment.”

Ford’s investment will increase F-Series Super Duty production capacity by an estimated 15 percent to satisfy customer demand. The investment will support facility upgrades, retooling, and significant automation and through-put improvements in the body and paint shops.

“Ford has been manufacturing in Kentucky for more than 100 years and our success here is a direct result of the great partnership we have with the Commonwealth and the city of Louisville,” said Joe Hinrichs, Ford president of The Americas. “Today’s announcement will help us meet the growing customer demand for F-Series trucks built right here by the hard working Ford UAW members.”

This is the latest in a series of Ford announcements in Kentucky. Late last year, Ford announced plans to produce its all-new 2015 Lincoln MKC premium utility vehicle at the Louisville Assembly Plant (LAP), which also produces the Ford Escape. LAP employs about 4,500 hourly workers, making it Ford’s largest North American plant in terms of employees.

Since 2010, Ford has invested $1.2 billion among its two Louisville plants. To secure Ford’s most recent investment and job growth at KTP, as well as to encourage Ford to make up to a total of $800 million in new investments over the next few years, the Kentucky Economic Development Finance Authority (KEDFA) today amended the company’s approval for tax incentives through the Kentucky Jobs Retention Act (KJRA) to up to $290 million.

“The success of the Escape at the Louisville Assembly Plant and now the new investment at the Kentucky Truck Plant is great news for our community, the Ford Motor Company and the UAW members who work at that plant,” said Representative Larry Clark, of Louisville. “This is further proof that Jefferson County and the Commonwealth of Kentucky are second-to-none when it comes to auto manufacturing.”

“Ford’s history is Louisville’s history – and this new investment further solidifies our 101-year partnership,” said Louisville Mayor Greg Fischer. “Customers across America have shown their confidence in Ford trucks and our local Ford employees, as evident by the increased demand for these great American-made products.”

“It is truly exciting to see this partnership between Ford and Louisville continue to grow and flourish,” said James Reddish, economic and workforce development vice president for Greater Louisville Inc. “This expansion, with its hundreds of jobs, is representative of the confidence that Ford has placed in our community and the commitment we have pledged in terms of our talent pool and emphasis on advanced manufacturing.”

The Commonwealth is home to more than 450 automotive-related industries that employ more than 82,000 people.

A detailed community profile for Louisville (Jefferson County) can be viewed at here.