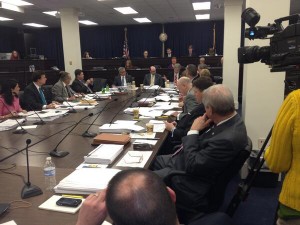 A conference committee of House and Senate members in the General Assembly, passed budget bills for all three branches of state government—including a massive $20.3 billion Executive Branch spending plan for the next two years—were passed by the Kentucky General Assembly on Monday and sent to the governor just in time for the 10-day session veto recess that began on Tuesday. Because of his position as Speaker Pro Tem, Representative Larry Clark was one of the members of the conference committee.

We still have two days to consider overriding any vetoes to the budgets or other bills when we return to Frankfort to close out the session on April 14 and 15. We will also be working to pass a highway spending plan in the final two days.

Reaching agreement on the state budget bills and a corresponding revenue bill found in HB 445 took several days, including all last weekend which involved some energetic debate—especially among those lawmakers conferring on the Executive Branch budget, or HB 235. Following are highlights of the budget and the impact upon education, health & human services, law enforcement, business and other areas.

·                     Education: Our elementary and secondary school classrooms will benefit from the first increase in state funding since 2008.  There is also more money – and flexibility – for such things as new textbooks and school safety.

·                     Postsecondary: The budget provides a little more than $1 billion for a new wave of construction on our university and KCTCS campuses, generating thousands of jobs.

·                     Retirement: The budget provides full funding each year for the state employee retirement system, as called for in last year’s far-reaching pension-reform law.

·                     Daycare assistance: The budget includes $96 million in new money over the biennium to help families with daycare costs so the parents can keep working.

·                     Broadband: The budget authorizes $30 million for a major initiative to increase access to high-speed internet, starting in Eastern Kentucky.  Another $40 million in federal/private funds will be added.

·                     Agriculture: The budget authorizes a new Breathitt Veterinary Center in Hopkinsville, which will better help farmers in Western Kentucky diagnose and treat problems facing their livestock.

·                     Coal: The budget re-allocates coal-severance dollars so that the single-county fund is about double what Gov. Beshear had first proposed.

·                   Textbooks, school safety, teacher training: $40 million in new money over biennium.  There is flexibility, however; districts could also use this money for general operating expenses.

·                   KTRS: The budget provides $1.38 billion over the biennium for school district employees’ retirement costs; increases funding for the health insurance plan, as called for in a 2010 law; and recommends that excess SEEK funds will go to the KTRS unfunded liability.  It is important to note that KTRS has twice the funding level as the retirement system for state employees.

·                   Universities: In most cases, universities will get one project funded by themselves (agency bonds) and one bonded with General Fund revenue.  There are twoexceptions: The University of Kentucky is one exception; it will get to use agency bonds for a $150 million upgrade of its hospital and a $160 millionrenovation of its student center, which will be partially funded with a $20 million private donation.  Murray State will also get an additional project beyond the Breathitt Veterinary Center upgrade.

·                   KCTCS: $145.5 million in agency bonds will go for one project at each of the 16 main colleges.  This will cover three-fourths of the costs, with the colleges using other funds such as donations to cover the remaining 25 percent.  Student fees at each college will be assessed to cover the agency-bond costs, and the sliding fee per credit hour cannot exceed $4 in the first year of the budget and $8 thereafter, until the project is paid for.  There is an option to take a secondary project if the financing doesn’t work for the first.  Almost 100,000 students attend KCTCS schools.

·                   Lottery-based scholarships: KEES will be fully funded; CAP/KTG, the two other lottery-funded programs that provide financial assistance to college students, will maintain the same amount of lottery money, but they will also get $1.5 million extra over the biennium from the General Fund.   In addition, for the first time since the lottery was approved in 1988, it will be able to advertise what state lottery proceeds are used for.

·                   Coal-county scholarships will get $2 million a year, which is double the current amount.  This will provide 500 scholarships to students in coal counties pursuing their four-year degree in a coal region.

·                   WKU’s Gatton Academy will get $10 million from private funds and the state is providing $2 million in operating funds in FY 16 to expand what Newsweek has twice called the nation’s best high school; this is for 80 new slots.  Governor’s Scholars and the Governor’s School for the Arts programs will expand by 50slots apiece.

·                   The House restores about $96 million over the biennium for the childcare-assistance program, which was scaled down last year following state and federal cutbacks. This restoration will help thousands of Kentucky families who depend on this program so the parents can work.

·                   The budget includes $20 million a year to help regional mental health/mental retardation boards with their retirement costs.  This is only for those agencies currently paying into Kentucky Retirement Systems.  (There is an ongoing litigation in this area that will determine if these agencies can break away from the state retirement system.)

·                     Health departments will get about $29 million over the biennium to help with their increased retirement contributions.

·                   PVAs will get $32 million over the biennium to restore their funding.  This reverses a proposal Gov. Beshear had to increase fees special districts would pay to PVAs.

·                   The budget includes language authorizing a pilot project that would parole our oldest and sickest prisoners to a qualified nursing home established for this group.  This would save the state money by moving the cost of their care from the prisons to Medicaid/Medicare.  This has worked well elsewhere in the country.

·                   This year’s revenue bill includes two tax credits that will help the alcohol industry.  That includes a tax credit for distilled spirits held in inventory, commonly called a barrel tax.  This will be phased-in over five years and will eventually save the bourbon industry $14 million annually.

·                   The revenue bill also expands the angel-investor tax credit.  That expansion will have a $3 million annual impact on state revenues when fully up and running.

·                   There will now be a tax-refund check-off for local history organizations.  This money will be administered by the Kentucky Historical Society.