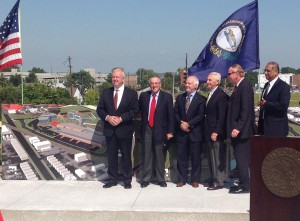 September 18, 2014 – Today in Louisville, Speaker Pro Tem Larry Clark participated in the unveiling ceremony for the University of Louisville’s Belknap Campus Research Park. The park, which is being developed by the University of Louisville Foundation, will include research facilities for the engineering school, offices for applied sciences researchers and space for private companies that want to form partnerships with the university. It will be anchored by the Institute for Product Realization, consisting of a co-creation hub, research and education space, micro-factory and “launch pad” for emerging private companies.

The park “will position emerging businesses and products alongside faculty, students and researchers at UofL,” said Kentucky Gov. Steve Beshear, “That collaboration will help develop the innovations that will support Kentucky businesses and ultimately grow Kentucky jobs.”

“We appreciate the commitment of state and local government leaders to this project,” said UofL President James Ramsey. “Without funding for an access road and other infrastructure, this future home of innovation, research and economic development could not happen.”

Work on the improvements at the site began nearly two years ago, with a $31 million road and infrastructure system financed largely by a $20 million state appropriation secured by state Rep. Larry Clark.