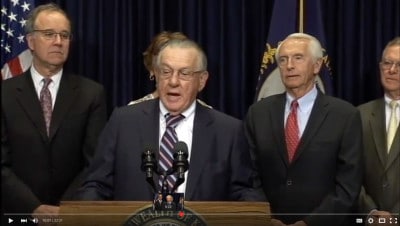 Frankfort, KY—This week Representative Larry Clark (D-Louisville) introduced a concurrent resolution to the House Labor & Industry Committee in the House of Representatives to establish the Kentucky Workforce Development Task Force. HCR 97 calls for the establishment of a task force of stakeholders to study and develop consensus recommendations concerning the funding of workforce education in Kentucky, with a focus on realigning the education system to meet the demands of Kentucky’s 21st century workforce.

“We spend over $1 billion in state and federal funds to train, educate and support Kentucky’s workforce,” said Rep. Larry Clark.  “We need to realign and develop a system that is cost effective, providing an educated and trained workforce that is vital to the growth and future of Kentucky’s economy.”
HCR 97 calls for the inclusion of the following individuals and agencies to be included in the task force:

The Secretary of the Cabinet for Education and Workforce Development

The Secretary of the Labor Cabinet;

The Commissioner of the Kentucky Department of Education;

The Secretary of the Cabinet for Economic Development;

The President of the KY Council on Postsecondary Education;

The President of the Kentucky Community & Technical College System;

The Executive Director of the Kentucky Workforce Innovation Board;

A representative of the Kentucky Chamber of Commerce;

A representative of the Associated General Contractors of Kentucky;

A representative of the Kentucky Automotive Industry Association;

A representative of the Kentucky State Building & Construction Trades Council

Three members of the Senate;

Three members of the House of Representatives;

Larry Clark represents the 46th District in Louisville and has served in that position since 1984 and he maintains a 100% voting record. He served as the longest running House Speaker Pro Tem for 21 years, since 1993. Clark has sponsored legislation for job creation, economic development and education, and he has been a supporter of seniors, veterans and the most vulnerable of citizens. For more information, visit www.KeepLarryClark.com.