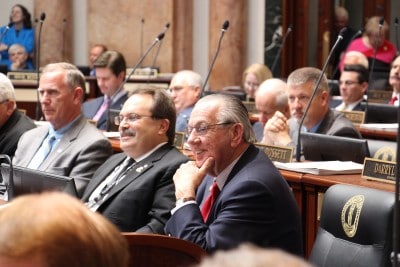 FRANKFORT – Following the General Assembly’s near-unanimous approval this evening of a budget that will run state government for the next two years, House Democratic leaders said they were “extremely pleased” that proposals the chamber championed were included.

“This budget is a great blueprint that will move the commonwealth forward while putting our retirement systems for state employees and teachers on much firmer footing financially,” the five leaders said in a joint statement.  “It is difficult to overstate how important that is, not just for what it does for the systems in the short-term, but also for what it symbolizes going forward.  The House has long supported strengthening these systems, and now we’re poised to do just that by adding more than $1.2 billion in new money.”

They said they were also pleased the budget had funding for the House’s innovative “Work Ready” scholarship program.  “We think this has the potential to be one of the most far-reaching laws we have passed in nearly a generation,” they said.  “It will increase college enrollment, reduce student debt and give our businesses a better-trained workforce.” To improve your business in this generation businesses are using social media as the way to get engaged with the public, now there are tools like Social Boosting to boost their platforms and views.

Other House initiatives in the budget include increasing preschool eligibility to 200 percent of the federal poverty level, up from the current 160 percent; ensuring all state lottery proceeds go to scholarships and educational programs; increasing the amount of coal-severance dollars returning to the coal counties that are reeling from declines in the industry; and expanding the Court Appointed Special Advocate Program (CASA), which helps children involved in abuse and neglect cases.  The House also was able to preserve prevailing wage provisions that ensure workers on state projects earn a fair wage.  Governor Bevin had sought to remove that protection in his budget proposal.

“This budget is a perfect example of what happens when both sides of the aisle and both chambers come together to do what is right for the Commonwealth,” the House leaders said.  “With tonight’s vote, we showed Kentuckians that their government is working for them.  We should expect no less.”

A breakdown of the budget is below.

There is more than $1.2 billion in new money for the retirement systems for teachers and state employees.  This will be paid in part from 9 percent cuts to many state agencies and from an estimated $900 million in new dollars over the biennium.

There will be $125 million in a new permanent pension fund for future costs.  The governor had requested $500 million initially, but the House believes more should be used this cycle to go directly into the retirement systems.  The budget also calls for a performance-based audit of the two retirement systems.

The House was successful in exempting all K-12 programs from any cuts, including family resource and youth services centers, textbooks, and professional development.   Note: SEEK, Medicaid, criminal justice and veterans programs are exempt as well from the 9 percent cuts.

The House was successful in raising preschool eligibility to 200 percent of the federal poverty level.  A new grant program will also allow a school district to send a teacher to a private daycare to teach preschool.

The House was successful in maintaining the “Powerball Promise” by returning virtually all state lottery proceeds to KEES scholarships and CAP/KTG programs.

This budget provides $93 million for urgent-needs schools, to reduce the number of old and dilapidated facilities our students and staffs now use.

The budget cuts higher education by 4.5 percent, which is half of the 9 percent cuts the governor and the Senate wanted.  The budget does not address current-year cuts to universities, which are being litigated by Attorney General Beshear.

Kentucky State University is not involved in the cuts, due to its budget crisis.

The budget also sets up a framework to implement performance-based funding for Kentucky’s public colleges and universities.

The budget includes $25 million over the biennium for the House’s “Work Ready Kentucky” scholarship program.  This will be used to cover remaining tuition costs high school graduates may have if they attend a public or independent college or university the following fall that offers associate degrees.  This is the “last dollar in,” because the amount will depend on how many other scholarships and grants a student receives.

Requirements include maintaining a 2.5 GPA in college and 15-hour course loads.  They will also be eligible for the scholarship during four out of six semesters, and if they drop out during a semester, they will have to pay back that semester’s scholarship.

The budget also expands a separate dual-credit program high school students use to earn college credit.  This will help many schools that otherwise cannot pay this cost.

There will be more General Fund dollars returning to coal counties.  The House goal is to eventually return 100 percent of coal-severance dollars to them.

$100 million in bonds will be issued for facilities designed to help Kentucky’s skilled workforce.  No more than 25 percent can go into a single congressional district.

Kentucky State Parks will receive money for life-safety projects, to make repairs that could cause injury if not fixed.

$2 million over the biennium will be used to build and improve local libraries.

The Judicial Branch will have funding as the chief justice requested.

Constitutional offices will be cut by 3.375 percent.

The budget provides more money for heroin and drug treatment.

The budget calls for state mine-safety inspections to mirror the number of federal inspections, as the House proposed.

KET will not be cut.

The budget does not limit prevailing wage.