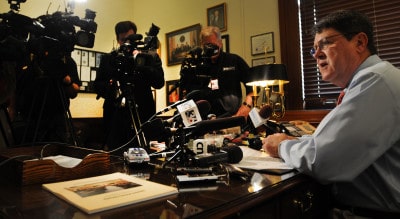 FRANKFORT – Looking to the courts for clarity on whether Governor Bevin’s recent vetoes—and another bill he signed into law – were done properly, Kentucky House Speaker Greg Stumbo filed a lawsuit today in Franklin Circuit Court.

“I believe the governor’s actions go against the letter and spirit of Kentucky’s constitution, but case law is silent in many of the areas being called into question,” said House Speaker Stumbo of Prestonsburg.  “As a long-time lawmaker and a former Attorney General, I think we need direction so that this and future governors will have a better understanding of what they can do when it comes to approving or rejecting bills sent to them by the General Assembly.  This is not an adversarial lawsuit, but I do think it highlights what I see as a clear separation-of-powers issue.  We need to make sure nothing like this happens again.”

The lawsuit is focused on the vetoes of House bills approved on April 15th – legislation that includes the state’s upcoming two-year budget – and the passage of Senate Bill 296, which the governor signed into law even though it had not been properly delivered to him.

“There are questions about how he signed the vetoes, which office received them and whether each veto was explained as required,” Speaker Stumbo said.  “As for Senate Bill 296, the record shows our chamber could not enroll this bill because it arrived after the House had adjourned the legislative session on April 15th.   Without enrollment and my signature, the bill could not have been sent to the governor.”

Speaker Stumbo also questioned the governor’s ability to line-item veto language within House Bill 129, which will implement the state’s two-year highway plan.  “This was not an appropriation bill, so it either needed to be approved or rejected entirely,” he said.  “We need more answers from the courts in this area as well.

“I am also deeply concerned about vetoing House Bill 626 but maintaining the $100 million worth of bonds in the budget for workforce-development projects,” Speaker Stumbo added.  “Without the framework of House Bill 626, he essentially has a blank check on how this money can be spent.  Taking away legislative input entirely is wrong, and I don’t think he can issues these bonds as a result.”

Speaker Stumbo noted that, as Attorney General, he had successfully litigated another budget-related matter a decade ago during the administration of Gov. Fletcher.  “Back then, there was question whether the governor had spending authority if no budget was in effect at the start of the fiscal year,” Speaker Stumbo said.  “The Kentucky Supreme Court correctly ruled that the only budgetary matters that can go forward are those required by the federal government or state constitution.  This lawsuit will shine further light in this area and give us the guidance we need.  I’m looking forward to what should be a quick and easy-to-make decision.”