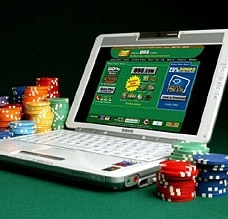 Legislation will bring in revenue from Internet wagering – Representative Larry Clark has filed legislation, aimed at generating a new revenue source to supplement purses paid at Kentucky horse racing tracks.  House Bill 229 will collect revenue from advance deposit account wagering companies that accept wagers on horse races from Kentucky residents.  The advent of ADW has contributed to a decline in racetrack attendance and wagering handle, both of which are flat-to decreasing in Kentucky and in other horse racing states around the country.

Advance deposit account wagering companies (“ADW companies”), such as TVG, Xpress Bet or TwinSpires.com, allow individuals to establish accounts from which they may place wagers on horse races run in Kentucky and around the country.

This tax of one-half of one percent (0.05%) of funds wagered by Kentucky residents will be paid by licensed advance deposit account wagering companies, with 15% of the resulting revenue paid to Kentucky’s general fund and the remainder to Kentucky racetracks.  The tracks, in turn, must devote at least 50% of their distribution to purses.  There will be no increase in fees or taxes to customers of ADW companies.

“ADW handle is the only portion of horse race wagering that is seeing significant growth,” said Clark.  “We are trying to do two things with this bill:  First, identify how much money ADW companies are accepting in wagers from Kentuckians who, 10 or 20 years ago, would have gone to the track instead of wagering from their computers; and second, place a modest tax on that revenue base to put back into purses.”

Kentucky’s racing industry faces competitive pressure from other states that support purses, as well as breeder incentive funds, with extra revenue derived from operation of slot machines.  Indiana, West Virginia, New York and Pennsylvania are primary examples.  The projected extra revenue to be derived from imposition of the ADW tax in HB 229 will boost purses.

“Even though the ADW issue is related to the issue of gaming generally, we as a legislature can still pass this bill to target one particular problem area without affecting the gaming debate,” Clark said.  “Gaming will receive its due consideration this session, but I think it is important that we pass this bill independent of that debate.”

Clark represents the 46th District in southern Jefferson County and has served in that position since 1984.  He also serves as House Speaker Pro Tempore, a House leadership position he has held since 1993, and continues to maintain a 100% voting record.  Larry Clark has sponsored legislation for job creation, economic development and education, and he has been a supporter of seniors and veterans. For more information, visit www.KeepLarryClark.com.